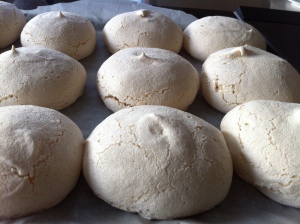 The baking had stalled and I’ve been offline for a bit since a) My kitchen mixer had developed a ‘wobble’ and had to be sent off to be fixed and b) My laptop screen broke, courtesy of Little Two. In fact it’s still broken since I have to take it to the Apple Shop for a quote and there isn’t one near me for miles, so I’m using Mr Normal’s computer instead.

Following up on my last post about egg free meringues, I’ve found a different way to make them. The last time I was putting an order in with my local health food shop, I was ordering Organ Egg Replacer and mentioned I was making meringues with them. The chap I was speaking to said: “Do you know you can make them with chickpea water? I read about it in a vegan magazine”. Wow, really? So off I went to Google, and it’s true. The liquid, also known as aquafaba can be used as an egg replacer. It’s a recent discovery and there is yet to be adequate research into how this works but there’s a site dedicated to the stuff and recipes popping up all over the web.

So when my fixed mixer arrived back (hooray!) it was back to business as usual in the kitchen. I have to credit Mr Normal with making the meringues actually as he’s quite the culinary adventurer himself and is going through a bit of a baking obsession phase. The method is easy and all he did was this:

One can of chickpeas
Caster Sugar (at least 100g)