So I finally got around to trying Soy Whip in a can. I have to say I was quite excited about this and trying it out in various ways for the kids.

First the good news: it tastes great, in fact pretty much the same as the carton version – sweet, but with a very light aerated texture, like a dessert version of whipped cream. Probably not the best for a low fat, organic diet but even so the ingredients listed aren’t that bad. 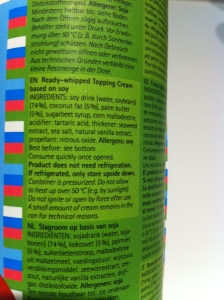 It works in exactly the same way as a can of normal dairy whipped cream. The kids loved it squirted directly on some fresh berries. We started to get creative and made some egg free meringues using Orgran Egg Replacer and made a raspberry cream sandwich:

These were scoffed in seconds.

Even the husband started to get enthusiastic and sneakily tried to eat it straight out of the can! We started to plan all manner of desserts and uses for it but then…here’s the bad news. After only the third time we had used it, it had stopped dispensing and we couldn’t get the cream out! The can was still full of cream (I could hear it sloshing inside when it was being shaken) but even after following the recommended instructions by cleaning the nozzle each time after use with warm water and leaving at room temperature for 15 minutes after taking out of the fridge, every time we pressed the nozzle there was the hiss of gas and nothing else…until all of the nitrous oxide had been emptied out.

A quick internet search revealed that this had happened to pretty much everyone else who had bought it too, which is a massive shame as I was hoping my can was just a dud. In summary it means that the product just doesn’t work, which is really disappointing as it actually tastes really good. I’ll stick with the carton next time.